Securo VIP event weekend and be my valentine DLC

Double GTA$ up for grabs!

So Rockstar, in an effort to push more usage of the Securo VIP feature are offering double XP and double GTA$ for all participants - VIP or Bodyguard. (poster at the end of this article)

Jobs can only be run if no other VIP's are currently running a job and have a cooldown between use. Thankfully most have different cooldowns, so you can run 1 or 2 jobs immediately after one another before you have to wait.

* Note - some of cooldowns need to be double checked but are pretty accurate.

Only VIP's can start the missions or challenges.

Being a VIP is not forever, from registration, you can be a VIP for 4 hours exactly which counts down during in-game time, this includes out of lobby events including heists, missions and races. Playing other games or GTA Story mode freezes the count down.

Bodyguards get extra RP if being in close proximity of the VIP they are protecting and receive the same winnings amount as the VIP. Bodyguards also receive up to $5,000 periodically (roughly every 5 minutes or so), based on their performance (each time their VIP dies, the winnings amount goes down by $200 until the next payment goes through). This means that other organizations are incentivized to attack the VIP you're attacking, just to spite you. dicks.

Both VIP's and bodyguards can instantly spawn (assuming another organization vehicle isn't nearby or hasn't been destroyed within the past 3 minutes), vehicles that can be used only by other members of the organization. There are a few slight differences though.

VIP's can 'drop' usable items for themselves and bodyguards including:

Whilst small, and slightly more expensive than ordering direct from Amunation or via your phone - these drops can literally mean the difference between a win and a loss especially on piracy prevention

A dedicated set of bodyguards and a VIP focused on doing only VIP missions (one after the other) can generate up to $1 million dollars in-game per hour. That's a pretty awesome amount right there, but it takes into account little intervention from competing organizations, and direct wins with low death rates or losses. This can be difficult to achieve in a busy lobby - but I've done it a few times with some good friends (shout outs to Steel, Dre & Emotive - you know who you are!). 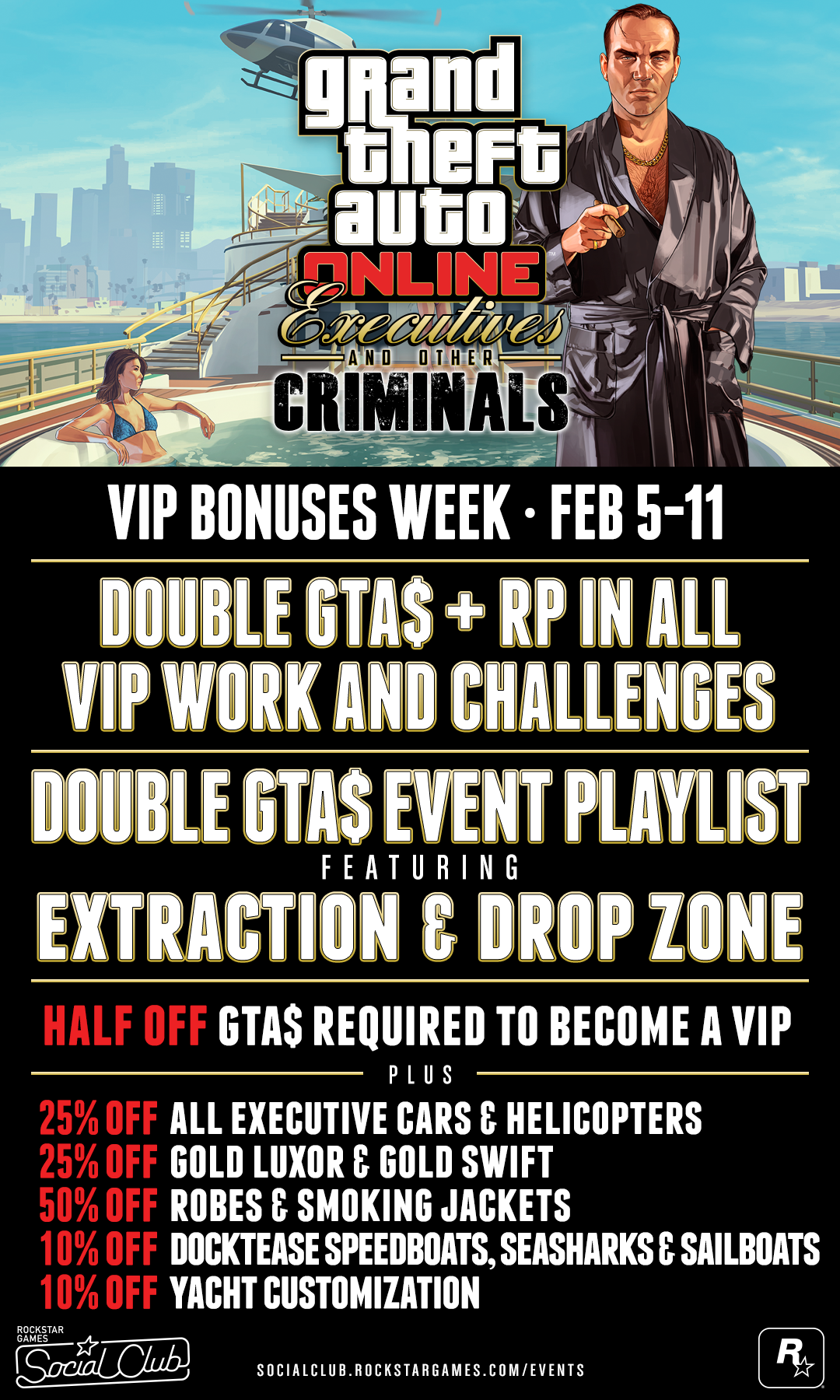 Be My Valentine DLC

Looking more an more official, even if still not confirmed by Rockstar, its 90% certainty that the highly anticipated #ValentinesDay DLC 'Be My Valentine' will drop around the day expected to arrive on either the 11th or 12th of Feb. It will run for about a week and then disappear again. Keep your eyes peeled in game and on Kablam for updates as this is likely to rapidly get updates closer to the time and during the event!