Lizard squad back in the headlines

The Gaming giant, owned by ActivisionBlizzard had its popular game titles including Hearthstone, Diablo, Overwatch and of course World of Warcraft (WoW) had its infrastructure and online game play taken down from a suspected DDOS attack with Lizard Squad claiming responsibility: (Twitter has suspended their account since this article was published) This is a big deal for Blizzard as all their games require connectivity back to their servers with no option for online play.

The attacks are highly suspected to be a 'punishment' for Blizzards recent legal attacks on 'Nostalrius' a free version of the game offering the original (Vanilla) version of World Of Warcraft (circa 2004 - 2007).

Vanilla WoW is the name given by gamers of the title before the first expansion pack The Burning Crusade was released - changing large parts of the game dynamics, existing areas, new areas and creating new character classes. Many old school gamers refer to Vanilla as the 'glory' days of WoW. Whether this is pure nostalgia or an active movement is left to be desired - however - The fact that multiple third party systems (that emulate Blizzard's servers) have emerged (MaNGOS being the largest) offering access to original content is proof there is something to the logic.

Nostalrius Was an emulator but also with server architecture so players could play online rather than just by themselves or see what its like to be a Blizzard game master. Run purely by user donation, the servers stayed up for a year, and amassed 800,000 user registrations with an estimated 200,000 active in the game.

WIth impressive user statistics like this, its no wonder that Blizzard went after the developers and host (OVM) threatening legal action if a take down was not immediately carried out. With subscriber rates to the 'official' service continuing to drop by over 50% of its peak of 12.1 million players in 2010, Blizzard is obviously aware that its MMORPG, originally launched in 2004 is slowly dieing, but wants to protect revenue as best it can. Many of the die-hard WoW players probably wouldn't take issue with the subscription fees if Blizzard paved a way to playing original content, however the technical challenge of updating 10 year old code, securing it against todays threats, server hardware, Battle.net authentication and graphics engine update is way more hassle than its worth.

Nostalrius went down a few days ago with an epic final gathering of many players amassing in one area for a set of final photos before the servers went offline: 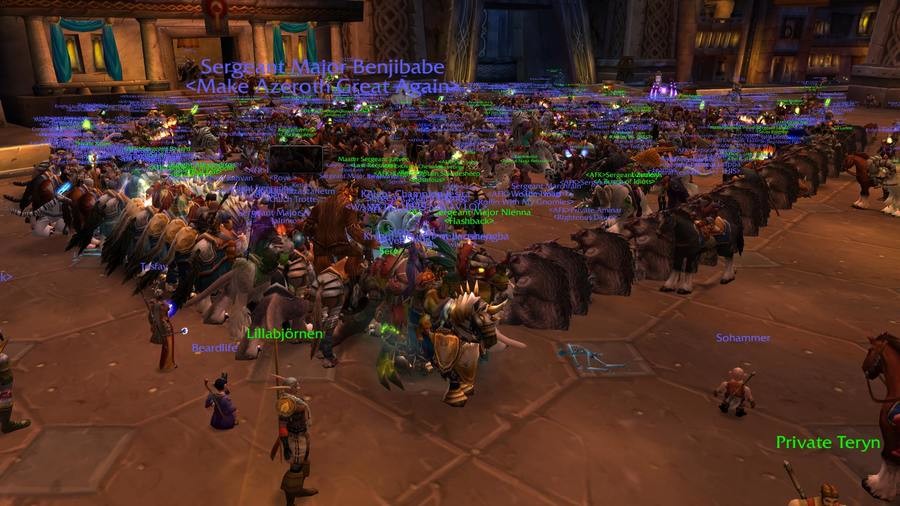 After the tears dried up of the shutdown and players regained their composure. They took to the internet. And many news stories (including this one were written about it). The status-quo for most protests in the gaming world are now, widely known as DDOS attacks. We've covered what they are and how they work before, so I won't go into the mechanics of it - but it can be devastating against even robust, well designed infrastructures like Blizzard's and Microsofts. And take slim to no money or effort to setup unfortunately.

So Lizzard Squad - infamous for the Christmas 2014 takedown of XBox live and Playstation Network, allegedly took on Blizzard and their upstream providers (internet providers) to successfully deny access to the game servers - taking the games down. Lets take a moment to see how this principle also shoots gamers in the foot. The players that likely weren't involved in the conflict or even knew about Nostalrius (ofcourse some may have been involved but lets look at the bigger picture), suddenly can't get access to the game they want to play. Obviously the punishment is aimed at Blizzard (loss of revenue, bandwidth / engineering costs.etc) but it also punishes the players.

Blizzard have acknowledged they got hit by a DDOS on twitter and are now running damage control on their PR side (angry gamers on both sides), but they havent changed their stance on Vanilla servers or third party systems. And I doubt that will ever change for reasons outlined above.

Check out the final moments of Nostalrius -